Overzealous Fine Art Exhibition
Congratulations to our 2018 Finalists
It's humbling to be asked to be a guest juror for an exhibition - to help select the work, and the ever difficult task of selecting a very few artworks to recognize with an award or honourable mention. To the hard working organizers, congratulations on a wonderfully expanding show. The Overzealous 2018 exhibition, as this guest juror sees it, is full of stories told and risks taken, showing imagination, personality, and thoughtfulness from the creators.

I see the work of artists who are very established and highly skilled, and of artists who are bravely making marks, finding their voice. In this show they are sharing with us the results of everything that has gone into the making. To all the artists, I offer my sincere congratulations.
Katie Wilde
Guest Juror - Overzealous 2018 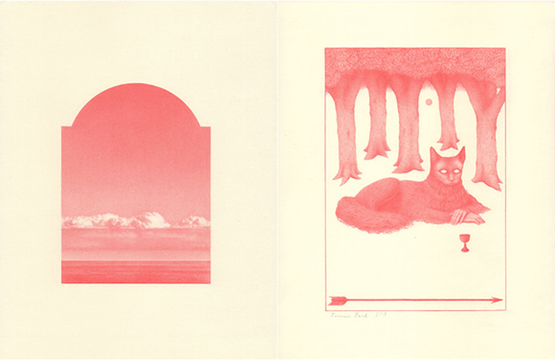 For doing something unexpected with coloured pencils. For the riskiness of committing to a single pigment in which to painstakingly render scenes from the artists own imagination and experience, one miniscule dot of micropointillism at a time. Scenes which, although cryptic and personal, are also full of things recognizable and curious. Echoes of sculpture, religious art of the Renaissance, tarot cards and film come through in a revived symbolist ethos, rendered in the colour of the sunlight through closed eyelids. To make coloured pencil appear as if it's a lithograph is thrilling. A very close look at these small treasures - in person if possible - is a must! 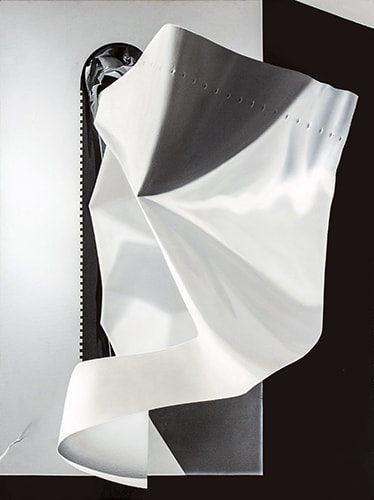 I like to be fooled for a minute, and I'll admit it took a second look to understand what I was seeing. The more I look the more I appreciate the small slivers of value shape, the gentle gradations, the humorously offset composition and the teasing title of "Desk Light", which hints that the subject of the painting is not the object that is depicted (the tissue box) but rather the light itself, how it falls over the desk, and anything on it. The tissue box is almost incidental, though it is treated with great care. Approaching the painting through greyscale as opposed to colour encourages meditation on the light itself, free from distraction by the local colour of the object. Well done. 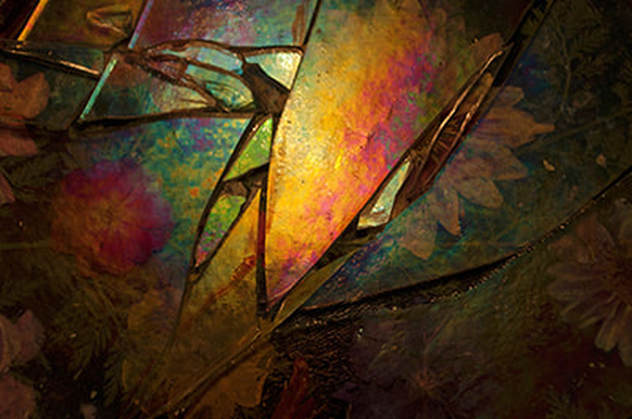 Leonora Buskin - The Light Amongst the Shattered

As I See It is a loose theme, and yet many of these works really do resonate with that phrase. An artwork is created between an idea and a final physical product. I can sense every stage of that in this photograph although it's hard to pin down what exactly it might be about. Broken glass is an evocative image in any context, but we're not presented with a simplistic or obvious version of that symbol here. An uncomfortably close point of view means most of what's going on cannot be seen, and denies context. What's beneath or embedded in the glass is just as curious as the broken glass, and the dark-surrounded glow that exists in the photograph is enhanced by the pearlescent paper on which it's printed. With such spare content it makes great use of formal elements and thoughtful presentation to bring it to a mysterious and emotional place. 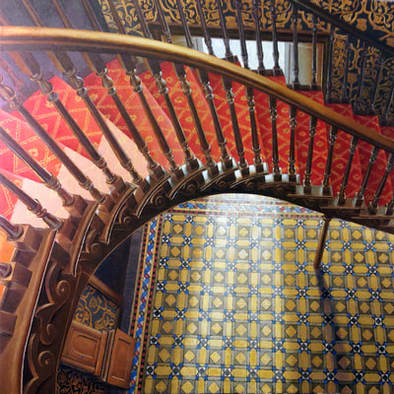 For sheer pleasure taken in composition and rendering that captures the eye with illusion. Unafraid of challenging patterns, colour and textures, it's confident and joyous. Any time I have to work to convince someone it's a real painting is a fun moment, and a testament to the artist's skill. 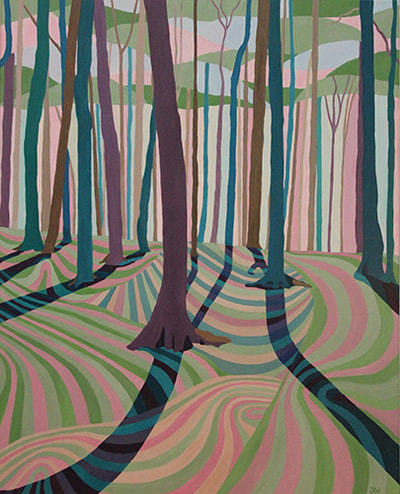 Jodi Kitto-Ward - Peace in the Woods

For a considered breakdown of a forest scene into a kind of pure swirling rhythm of hard lines. It's nearly impossible to find a clean unbroken line in a real forest, so the fact that this one feels as believable as it does is worth wondering about. The treatment of this woodland setting using rhythmic geometry and a limited palette of unexpected colours was an enjoyable surprise. 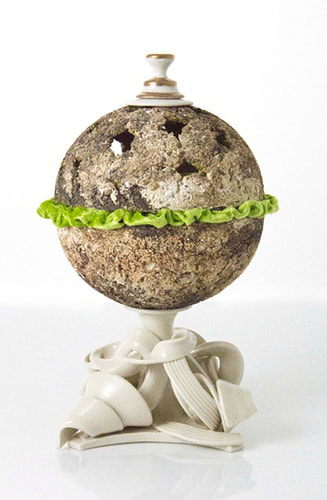 This unusual, decadent, wonderful object is a jewelry 'box' I can see committing itself to a single treasure. There's something to be said for ritual, for deciding an object is special enough to deserve an entire artwork to house it. In this context, the absence of any jewellery makes the artwork vibrate with potential. In a contrast of texture and form, a strange, smooth, looping, folded base supports ancient-seeming globe that recalls a thurible, ancient ruins, and a planet about to explode or coalesce around its molten mantle. The lettuce-coloured fabric lining is a rather lighthearted choice and notable departure from a traditional royal red or blue. To have a functional artwork so extravagant yet so unique, interesting enough on its own for a plinth but designed to sit on a vanity and itself house a different treasure - is a treat to encounter. 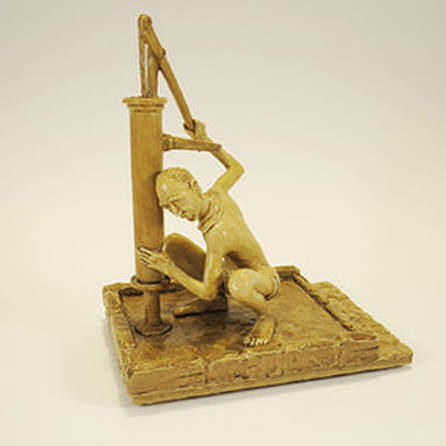 A little moment with a lot of story. The figure makes five points of direct contact between his body, the pump and platform. His one hands grasps the pump handle but the other folds around the main body of the mechanical object, and he rests his head against it as he squats on bare feet, maybe listening for the first hint of an answer to his prayer. The angle of the pump handle, echoed by his elbows, knees, and hips forms a harmony of negative and positive space. The position of the man is so expressively involved with the machine, and we can't help but wonder what will happen next - will water come out? If it does, if he succeeds, water will flow down his back. So either he doesn't mind that outcome, or he doesn't believe it will happen. A poetic little sculpture that lends itself to thought.